Bitcoin vs. Ethereum – Which is the Right Investment for You? 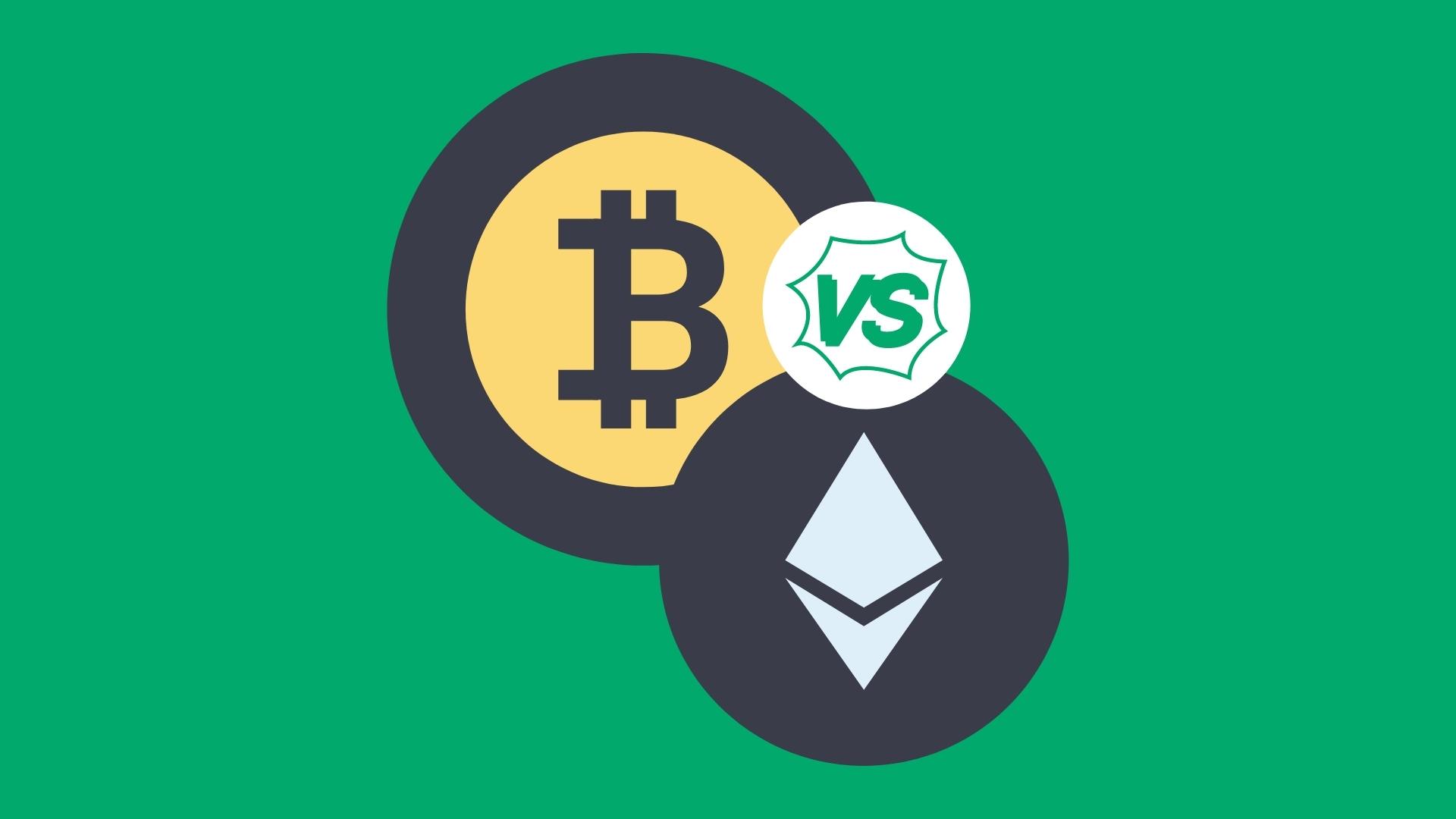 This article will provide an overview of both these types of cryptocurrencies, outlining what they are, what they are valued at, and what they can be used for, and more.

As the world of cryptocurrency opens itself up to newer and more accessible frontiers, the general public seems to have become more and more inclined toward this elusive yet compelling kind of investment.

Today, cryptocurrencies like Bitcoin and Ethereum boast a high exchange value as well as more innovative use cases, especially in the case of Ethereum.

Importantly, Bitcoin and Ethereum are currently the largest cryptocurrencies by market cap and exchange volume.

While Bitcoin is inarguably the cryptocurrency that started it all, Ethereum, although a more recent innovation, has taken the financial, computing, gaming, and even art worlds by storm in recent years.

If you are trying to choose between Bitcoin and Ethereum for investment purposes, you have come to the right place.

This article will provide an overview of both these types of cryptocurrencies, outlining what they are, what they are valued at, and what they can be used for.

Further, the article will outline some of the risks involved with investing in each cryptocurrency.

Finally, the article will close with some advice on which one you should invest in depending on your needs.

An Overview of Bitcoin

Bitcoin was, as you may know, the very first cryptocurrency on the scene, and it is the token that started it all.

Although it started from relatively humble beginnings, today, Bitcoin is the largest and most valuable cryptocurrency on the market.

This high value and large market cap, however, makes Bitcoin one of the most volatile cryptocurrencies available today as one coin has ranged in value from under $30,000 to over $60,000.

The Case for Bitcoin

Many investors today see investing in Bitcoin as a store of value that, like gold, can help guard against inflation.

For this reason, Bitcoin has even been dubbed as digital gold.

Since there is a finite amount of Bitcoin available out there, investing in Bitcoin has often been likened to investing in gold or other alternative finite assets like horses or art.

Investing in Bitcoin is not like investing in the stock market because a company can always issue more stock options.

However, the amount of Bitcoin in the crypto sphere will always be 21 million coins.

Therefore, despite the volatility of its exchange value, many investors buy Bitcoin for the same reason why people keep gold in a safe or buy diamonds.

Even if the value of the dollar drops significantly, like gold, Bitcoin will always retain its own separate value.

If you choose to invest in Bitcoin, you are banking on the fact that Bitcoin will eventually become a widely accepted asset for businesses and vendors.

While many businesses do currently accept Bitcoin as a form of payment, the vast majority of sellers are not on board yet.

Furthermore, whether or not it will be widely accepted in the future is anyone’s guess.

A second downside to investing in Bitcoin is the large amount of energy consumption it takes through the computing power of the Bitcoin mining process.

It is this process that keeps Bitcoin in circulation in the market, but due to the large amount of computing power needed for mining, it is a highly energy-intensive process.

Currently, Bitcoin transactions are estimated to consume more energy than the entire country of Venezuela.

More recently, Elon Musk’s company Tesla decided to suspend Bitcoin as a form of payment due to the high energy cost required.

If other companies follow suit, this could lead to a depreciation in the value of Bitcoin, which is a cause for concern for anyone who will have invested in Bitcoin by then.

An Overview of Ethereum

While Ethereum is often compared to Bitcoin, the two are quite different from one another.

Bitcoin is a crypto token, while Ethereum is a software platform that gives users the opportunity to create other crypto-oriented apps on it.

To use the platform, users must buy the network’s native digital currency called Ether, which can be used to pay fees to the network for creating one’s own apps.

The success of applications created by developers on the Ethereum Blockchain means success for Ethereum and Ether.

Developers can also create what are known as ‘smart contracts’ on the Ethereum Blockchain, which allow for safe and decentralized financial transactions to occur between users.

Sign up to Coinbase here and get 10$ FREE Bitcoin

The Case for Ethereum

When one invests in Ethereum, they are essentially banking on the expansion and continued use of the Ethereum network.

This will lead to more developers creating apps on the Ethereum network and hence more people buying Ether to pay the relevant fees.

If you invest in the tech platform known as Ethereum, you have to bank on the speculative fact that more people will continue to expand on the nascent capabilities of the Ethereum network, hence pushing up the value of Ether.
Furthermore, smart contracts are seen by many to hold to potential to revolutionize a variety of industries and processes that are currently mediated by a third party.

If Ethereum manages to take off in this way, its value may even overtake that of its close competitor, Bitcoin.

Finally, developers at the Ethereum networks are currently working on ways to update the Ethereum Blockchain to make it much more energy-efficient.

The updated technology, known as Ethereum 2.0, is expected to use over 99% less energy than the technology that is currently in place.

In this way, Ethereum could set the stage for more energy-efficient Blockchain technology, which does nothing but increases its value for companies and businesses.

As with any cryptocurrency, the future predictions about its growth and expansion is purely speculative, and hence there is no guarantee that Ethereum and Ether will become widely adopted in the future.

Moreover, Ethereum is not as well-known as Bitcoin is, so if merchants are going to be widely adopting any one form of cryptocurrency in the near future, it is more likely that it will be Bitcoin and not Ethereum.

Ethereum’s biggest asset for future growth is that it represents an innovative use case of Blockchain technology that can be used by developers to create crypto-oriented games and non-fungible tokens.

Most people who invest in Ethereum predict that while it may not be Ethereum itself that grows in value, it will be Blockchain technology that will become widely adopted for different uses.

However, the idea that Blockchain technology will soon be revolutionizing many of today’s industries is still highly speculative.

If Blockchain technology does not pan out, Ethereum could go down with it.

Should I Invest in Bitcoin or Ethereum?

As mentioned, there are similar risks associated with investing in both Ethereum and Bitcoin as all expectations about future adoption and growth are highly speculative for either one.

However, if you are to invest in one cryptocurrency or the other, either of these two is a great option as they currently hold the top places on the cryptocurrency market, and hence either one could be a great investment option.

Meanwhile, others suggest that it may be more beneficial to split the difference and invest in both Bitcoin and Ethereum.

However, if you are dead set on investing in only one of these two cryptocurrencies, the choice between Bitcoin and Ethereum can be a rather confusing one.

While Bitcoin is certainly older, better known, and more well established, the technology that powers Ethereum is more efficient and hence tends to outweigh some of the benefits of investing in Bitcoin.

Those who choose to invest in Ethereum over Bitcoin argue that due to its innovative and revolutionary use of Blockchain technology, its potential for growth far supersedes that of Bitcoin.

Given that Ethereum made the introduction of NFTs and Smart contracts to the general public possible, many more people are coming to understand the far-reaching potential of this technology to transform many other aspects of our lives into a decentralized, peer-to-peer procedure.

However, it is certainly true that we are still fairly early in the adoption curve of both Bitcoin and Ethereum, meaning that both cryptocurrencies currently hold much-untapped potential.

Financial planner and founder of CapitalWe, Vrishin Subramaniam, argues that while Bitcoin is the more mainstream cryptocurrency, Ethereum is more utilitarian.

Meanwhile, other experts in the field argue that you don’t necessarily have to choose between Bitcoin and Ethereum.

Many believe that investors have greater chances of success if they simply split the difference and invest in both.

As outlined in this article, the answer to the question of whether to invest in Bitcoin or Ethereum is not a simple and straightforward one.

Therefore, whether you invest in Bitcoin or Ethereum, you will have to do enough research on market trends for your chosen crypto and keep yourself updated on what’s going on in the crypto world more generally.

With enough research and insight into the crypto sphere, we are sure you will make the right investment decision for yourself.

The Latecomer's Guide to Crypto

If you are new to crypto, follow this guide beginners guide for cryptocurrency and learn how to invest in it.

4 Most Popular NFT Coins & How to Buy Them

Find out the 4 most popular NFT coins in the crypto market today and read our guide to cryptocurrency basics.